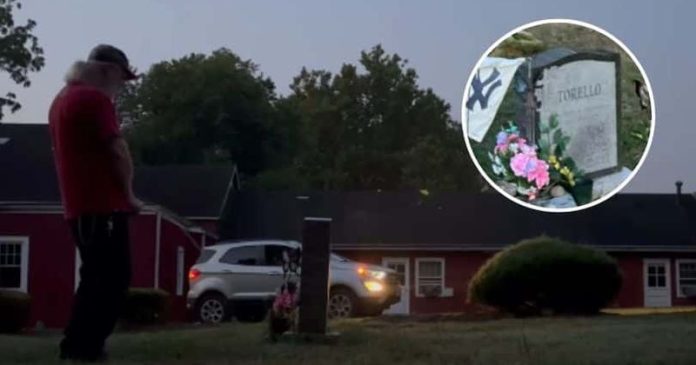 A man was caught peeing on the grave of his ex-wife, whom he divorced 48 years ago. A shocking video shot by a hidden camera set up by family members shows the man pulling up in his SUV, getting out, and walking over to her gravesite while the engine is still running. The man then proceeds to relieve himself, completely unaware that his every move is being recorded on camera. He even brought along his current wife to desecrate the memorial.

The video was uploaded to Facebook by 43-year-old Michael Murphy, whose mother Linda Louise Torello is buried six feet beneath the gravesite being desecrated. She was 66 when she passed away from cancer in 2017. Following numerous instances of poop bags being left on Torello’s grave, they made the decision to stake out the cemetery. They were shocked to see their mother’s ex-husband arrive five mornings in a row at her cemetery at Tappan Reformed Church in Orangetown, New York.

Murphy wrote, “THIS IS BREAKING MY A man from Bergen county New Jersey has been leaving bags of poo and pissing on my mothers tombstone almost every morning like a normal routine’ assisted by his wife also, we have Weeks and months of evidence. It has been reported to the police and the news outlets’ no one in my family has had contact with him since 1976 or so how he found my mothers grave site we are not sure. but this stems back to a problem almost 50 years ago . Pray for us thank you and please share this!!!”

In an interview with The New York Post, Murphy described what it was like to apprehend the man. “I felt like getting out and killing him,” Murphy said.

At first, Murphy saw a bag of feces but assumed it had been dropped there accidentally, perhaps by a dog walker. The next time he went to the site, however, he discovered the same issue. The children of Torello obtained permission from the cemetery manager to install a camera next to the grave in order to capture the offender before the police arrived.

Upon reviewing the video, they were shocked to discover that it was a man who had once been briefly married to Torello in the 1970s. Additionally, it seems the man would drive to the cemetery each morning at first light to urinate on Torello’s grave, in front of his current wife. According to Murphy, the video and images he and his sister took showed the man driving to the cemetery at around 6.15 am almost every morning just to urinate on the grave.

“I can’t get my wife to go out to dinner but this guy gets his wife to go along with him to desecrate my mom’s remains every morning!” Murphy said to Daily Voice. He added, “I was shaking while I was hiding. My sister was crying. … I was sick I was so angry.”

In another post, Murphy shared a photo of him sitting near his mother’s grave and wrote,

“DEAR MOM💔 As I sat in the shadows this morning looking over your grave with every car that passed by, my heart pumped so hard with rage. As long as I breath on this earth till we meet again, I promise to never let anyone violate your resting place again……. I LOVE YOU MISS YOU SO MUCH & OUR FAMILIES FIGHT FOR JUSTICE IS NOT OVER Your son Michael Andrew Murphy ❤️💔❤️💔😢”

In New York State, damaging a cemetery with damages greater than $250 is considered a crime. This could entail stealing from a graveyard, toppling, damaging, or stealing a headstone, destroying flowers, vases, or other personal items, or completely or partially digging up graves.